When does a shoe become a legacy?

Swoosh’s guest designer for this project, Sean Wotherspoon, has grown from his lowly store in Virginia State, Round Two, to become one of Nike’s most profitable assets. He hosts over 400,000 Instagram followers, regularly showing off ‘flea-market hauls’ from around the US.

His design was chosen back in 2017, to be released one year later in-line with Nike’s ‘Air Max Day’ celebrations. You know, like Halloween; with less ghouls and more spending. Customers voted for their favourite of 12 mock-up designs running under one condition; the shoe must be a combination of multiple models that already exist. It must be a hybrid.

Voting could take place in stores or at home. Of course, this meant chains would promote their home-grown talent. The likes of London’s Footpatrol promoted their resident designer, Alexandra Hackett — or Miniswoosh as she is commonly known — regularly throughout the voting process.

Her design blended a handful of Nike models, sampling favourites to create something that would theoretically cater for every audience. Unfortunately, it didn’t. London was left to battle it out for second place with Moscow’s Artemy Lebedev. His all-black Vapormax/Air Max ’97 design was received surprisingly well, despite his relatively unknown status. Many felt his mock-up should have been chosen on the basis that there was little to no press on his behalf — each vote was based on taste and naked attraction.

Sean’s winning design took inspiration from past collaborations. In particular, he drew from three Nike collections in partnership with Dutch giants, Patta, who used the ‘old school’ feel of cord, denim and an infamous ‘mini-swoosh’. Yes, the mini-swoosh was a detail that Nike invented; Hackett adopted it later as her Instagram tag.

When it came to intricate detailing, Wotherspoon opted for personalised patches and made as many aspects of the shoe as interchangeable as possible. The heel holds a denim pull-loop, perhaps paying tribute to Guess Jeans; another brand who took the young LA native on-board.

He fought off 11 international visionaries, some having rather ‘alternative’ visions as to what Nike should be producing. The hybrid itself combined an Air Max ’97 upper with Air Max ’87 swoosh detailing and midsole.

There’s a lot going on to say the least, perhaps too much?

With connections in every corner of the globe, Sean and Nike started to roll out pairs to Friends and Family mid-2017. Towards the end of the year, Sean himself travelled around areas of the US accompanied by a VW Campervan, draped in the same colours as the shoe. Pairs were sold from the van’s boot, combined with exclusive drawstring bags, patches and even a T-shirt.

2017 was the year Nike’s freight train picked up momentum, re-writing the rules for trainer releases. With fashion designer, Virgil Abloh’s first collection and workshops going down a storm, Nike carried their drive into March with Sean, whilst showing no signs of slowing down. When will their stream run dry?

Things could change, with rapper, Drake, potentially signing for Adidas. But, he joins Kanye in the fight against Nike’s bottomless 2018 arsenal,  bombarding Three Stripes week-in, week-out. As I’ve said, Nike may have played their ace just 4 months into 2018. If rumours are true, this is just the beginning. 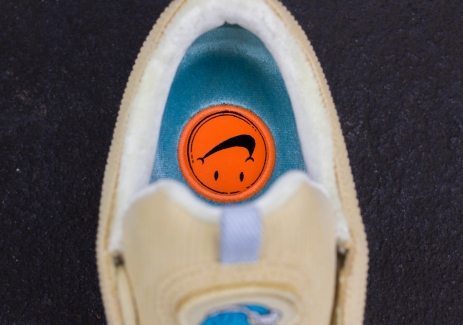