BOOTLEG or counterfeit, whichever angle you view this argument, in my eyes both of the above scream ‘cheap, fake, knock-off’. What I’m saying is, they’re not real. Bootleg culture has been present for years.

It stems from an evermore expensive industry, littered with even more exclusive collaborations and releases, week-in, week-out. Consumers can’t keep up, it’s a relentless rally, wave-after-wave-after wave. It’s the consumers that opt for cheaper alternatives — a naturally maternal instinct of scrimping and saving for the 12 months prior to a holiday, that, on a wider scale is the situation.

Cue a schoolboy’s hero. Skateboard in hand, commonly clad in baggy denim, $1000 trainers and a carelessly fitting t-shirt. No cape in sight, Sean Wotherspoon is a modern-day, erm…visionary.

Unless you’ve had your head in the sand for the last year, the fashion-world’s up and coming figurehead is carrying an image of a long-haired, beardy, vegan man with a fetish for used and abused clothing. Physical appearance aside, how is Sean different? Why has NIKE chosen HIM as their poster boy?

It’s all down to cultural appreciation as a whole. The 28-year-old has seen his store, Round Two, grow from humble beginnings out in Virginia, to the celebrity hotspot spreading as far as New York and Los Angeles. His stock combines the US equivalent of a ‘car-boot’ sale purchases and ‘finds’, alongside box-fresh retail stock at increased prices. Sean builds on my most recent article, delving into resell culture. 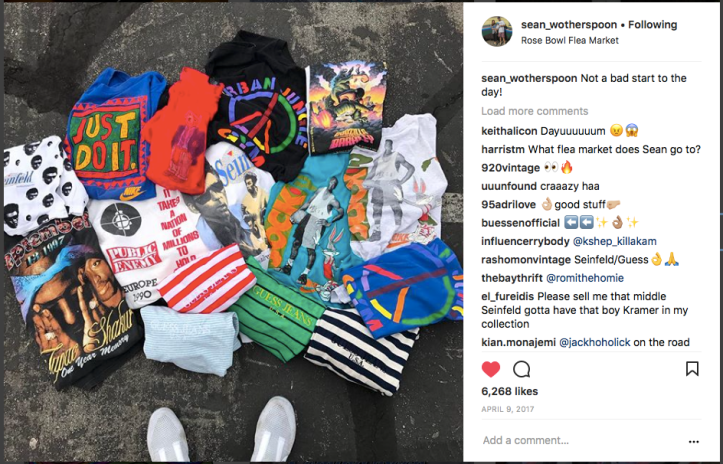 To single out a market based solely on a combination of overused, undersaturated and sought after clothing, is one thing, but to manipulate and grip the soft under-parts of street-culture’s fastest growing industry — it’s inspiring.

You may wonder, what does this have to do with bootleg? Sean actively promotes this produce. As he describes it, bootleg products are original, not copies — brands would have never released these products, however their name has been tied to it. He says this cannot be fake, it’s not mimicking any brand or design, it’s not profiting from a popular silhouette, it was never real.

Fake, insinuates replicating anything already in existence, the other side of Sean’s moral margin. This covers your average social-media-marketplace dodgy deal, to a piece of everyday electrical equipment. There’s one underlying issue, one that strikes a note with me on a personal level… what is in these fakes? What are they actually made from?

There’s a criteria that clothing must abide by prior to shop floor sales. Care labels, being bound by employee labour laws and most importantly; content labels. Apparel, namingly footwear, is subject to concoctions of dyes and treated materials — however they don’t always abide by regulations.

To put it bluntly, saving £100 to buy a fake pair of shoes could put lives at risk. A pet, a teething child or even yourself; if a poisonous dye bleeds, one that doesn’t fit regulations, then ingestion could be potentially fatal. You’re not only paying for the brand, you’re also paying for a safe wellbeing.

For Nike to promote Sean as their poster-boy, for a project that could make-or-break their year is somewhat risky. I can’t name many brands who would implore the use of figures in his position to hold the focus of their social media strategy. In part, his store gains a lot of its footfall from customers craving vintage bootleg clothing, slapped fondly across his own Instagram page.

A population could be divided by this argument, it all fizzles down to one final decision: saving cash, or wanting something of higher quality. Both pose a risk, whether it be to family or bank account; leaving a difficult choice ahead of fashion aficionados.